You are here: Home

Claregalway Castle will host a special evening of 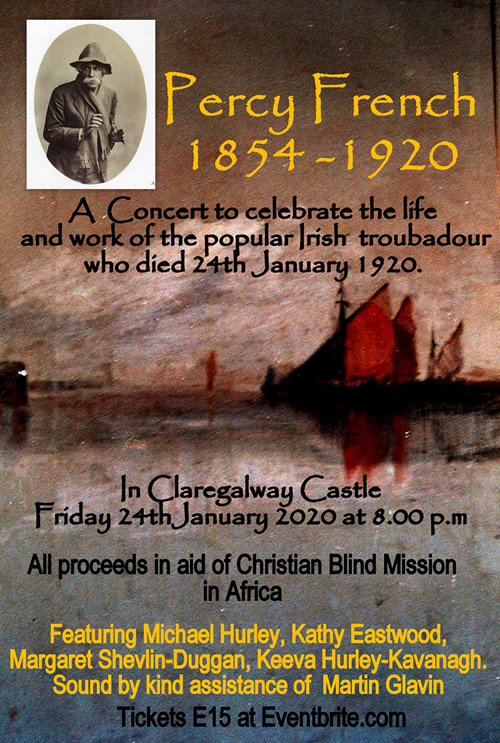 song and reci tation in memory of the well-loved and highly talented Percy French who died on 24th January 1920. Percy was born at Cloonyquinn Co. Roscommon on Mayday 1854. His father was a local judge and minor landlord whose forbearance with his tenants during the famine caused him severe financial problems leading to the loss of his Roscommon estate and the taking of his nine children to live in England. William, or Percy (it was his mother’s maiden name) as he preferred to be called returned to Ireland at his father’s behest to study Civil Engineering at Trinity College in Dublin. He did not have an academically positive experience in Trinity; he spent all of his evenings playing on the banjo in the orchestra in The Gaiety Theatre. A fellow student was a chap named Charles Manners who collaborated with Percy in a Black and White Minstrel stage act.

Percy later claimed that because of his delay in qualifying Trinity had to make a choice between giving him a degree or granting him a pension!

His first published song was to be Abdul Abulbul Ameer, but he never made a penny royalties from it as he had neglected to take out copyright, while a London publishing firm did so and claimed the royalties. Soon he would hear of a flute player in Co. Leitrim who raised money to pay his rent by the simple expedient of running a dance: hence came Phil The Fluter’s Ball. The late Brendan O’Dowda who was a wonderful exponent of Percy’s songs once said that if he himself was to be remembered for any one song it would be for Phil The Fluter.

Percy worked as an inspector of railway drainage for the Midland Great Western Railway Company. He was dismissed and became editor of two magazines The Jarvey and The Irish Cyclist to each of which his young and beautiful wife Ettie Armytage Moore (his ‘little Ray of Sunshine’) contributed some fine drawings. However, the popular newspaper of the day. The Freeman’s Journal rather unkindly wrote of his wit saying ‘some of the jokes we’ve seen before, some we haven’t seen yet!’ The periodicals failed in 1890.

Ettie died in childbirth in 1891, soon to be followed by her baby; Percy was devastated and shortly afterwards wrote the hauntingly plaintive poem Gortnamona (some say a townland near Ballinasloe, although there are seven of the name in Co. Galway), set to music by the orchestra leader Philip Green in the 1950s.

The following year, Percy collaborated with Dr Houston Collisson to devise a musical named Strongbow, the story of Dermot MacMurrough which was staged at the Queen’s Theatre in Brunswick Street (now Pearse Street) in Dublin. There he met a young English girl named Helen (Lennie) Sheldon who was a member of the chorus of the show. Percy fell in love with the girl and began a correspondence with her following her return to England.

The couple were married in Helen’s home town of Burmington in 1894 and their first home as a couple would be at his studio at 12 Dawson Street, Dublin.

Percy and Helen would have three daughters. Interesting that they named the first-born Ettie after Percy’s first wife, the others were Joan and Molly. Percy travelled the world giving concerts and shows but it is accepted that he saw himself primarily as an artist and today his paintings, mainly in watercolour, have been known to sell for as much as €44,000 at auction. Prior to his second marriage Percy lived at Baldoyle in Co. Dublin where he painted seventeen door-panels with local scenic views and a couple of people, believed to be his fiancée and himself (in the guise of a clown). One of the doors is now on display at the Percy French Museum in Bangor Co. Down.

He was popular with the Royal Family and was summoned by the Prince of Wales to give recitations and talks, sometimes on humour and art. The family commissioned two painting from Percy as their wedding gift to the Queen of Spain.

Perhaps Percy French’s most famous song is ‘The Lay of The West Clare Railway’ or ‘Are you right there Michael’. This evolved from an episode when he was Kilkee-bound for a concert, but a breakdown of the train prevented his giving a performance. He successfully sued the railway company for £10 loss of earnings. However, while a world of folklore has grown up out of this incident, there is in fact no record of Michael (Talty, the guard) ever having sued the songster for deformation. The song has succeeded in making the railway line probably the best remembered narrow-gauge system in these islands.

1914 brought sadness to Percy on the outbreak of war. He travelled to France and Belgium to entertain the soldiers, but following the 1916 Rising in Ireland his audiences dissipated in England because of strong anti-Irish sentiment. In that year he suffered a bad fall on Blackrock railway station in Dublin which left him fragile.

Percy died of cardiac arrest following pneumonia at the home of his cousin Canon Johnny Richardson in Formby, Lancashire on the twenty-sixth anniversary of his wedding, January 24th in 1920. He has left a wonderful legacy of witty, soulful, and observant songs, poems, and parodies including The Four Farrellys and Carmody’s Mare. Thousands of his watercolours still exist in galleries, museums, and in private collections all around the world. His contribution to Irish cultural life in the late nineteenth century is incalculable.

The world of the stage mourned him and Masses were offered in many Catholic churches for the repose of his soul despite the fact that he was of the Protestant faith. His long-time friend Houston Collison (by then a clergyman in London) conducted his funeral service but only survived him by a few months.

The commemorative concert featuring his life and works will be presented on 24th January in Claregalway Castle. Devised by Michael Hurley, the concert will also feature:

All proceeds from the event will be donated to the Christian Blind Mission towards their work to prevent blindness in children in developing countries. Tickets for the concert are available from Eventbrite.com and are priced at €15 plus booking fee.